I recently acquired a book originally published in 1909, called “Games for The Playground, Home, School, and Gymnasium.” 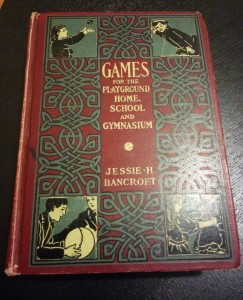 This book is filled with lots of strange and interesting games for children. One that caught my attention is called: “What Is My Thought Like?”

You start with all players in a circle. One player thinks of a person, object, or abstraction without telling the other players what it is. This player then asks all the other players in turn, “What is my thought like?” Each player answers in any way they would like, for example a player could say, “Your thought is like an umbrella.”

If a player happens to guess the thought, the first player must pay a forfeit.

This made me think of the famous riddle in Alice In Wonderland: “Why is a raven like a writing desk?”

The way it’s phrased is exactly as you’d ask in a game of “What Is My Thought Like?”. Maybe this “riddle” is actually a call back to an old children’s game. This riddle is said to have no right answer. This would make sense if it’s mean to challenge you to play the game and come up with your own.

A presentation I did in highschool about how we tr

I've been playing with #stablediffusion #aiart #

Progress on VR world called "Back Yard" Made with

Favorite moment from Stray so far. I saw mattress,

Going to start playing #straygame Testing out my

This is my @blender.official donut 🍩 Created u