What follows is a list of “hacker movies” in no particular order.

A young man finds a back door into a military central computer in which reality is confused with game-playing, possibly starting World War III.

A female engineer, with the assistance of her pilot-wannabe male friend, discovers a way to rip off ATM machines, but in doing so stumbles upon a plot to destroy the U.S. monetary system.

This film is based on the story of the capture of computer hacker “Kevin Mitnick”.

Ben Crandall, an alien-obsessed kid, dreams one night of a circuit board. Drawing out the circuit, he and his friends Wolfgang and Darren set it up

A chronicle of the founding of Facebook, the social-networking Web site.

11-year-old Davey, whose mother is dead and whose father doesn’t spend nearly enough time with him. So the boy loses himself in video games–and even has an imaginary friend, a super-resourceful secret agent.

A young genius frantically races against time to crack an enemy code and solve the mystery surrounding the woman he loves.

A female cyborg cop and her partner hunt a mysterious and powerful hacker called the Puppet Master.

A paranoid and personally-secretive surveillance expert has a crisis of conscience when he suspects that a couple he is spying on will be murdered. 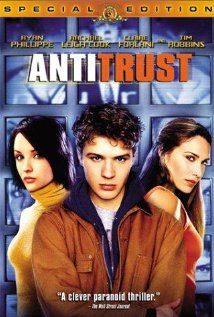 A computer programmer’s dream job at a hot Portland-based firm turns nightmarish when he discovers his boss has a secret and ruthless means of dispatching anti-trust problems.

During a preview tour, a theme park suffers a major power breakdown that allows its cloned dinosaur exhibits to run amok.

History of Apple and Microsoft.

Complex but lighthearted thriller about computers and cryptography, government and espionage, secrets and deception and betrayal.

A computer hacker learns from mysterious rebels about the true nature of his reality and his role in the war against its controllers.

A journalist is aided in his search for a woman who has been missing — or dead — for forty years by a young female hacker.

New York cop John McClane gives terrorists a dose of their own medicine as they hold hostages in an LA office building.

A secretive renegade counter-terrorist co-opts the world’s greatest hacker (who is trying to stay clean) to steal billions in US Government dirty money.